in Maori “tiger” or “horse”

in Finnish “magic” or “spell”

in Japanese “Big house” or “God like person”. There are also two more phenomena in Japanese history related to Taika; Taika Era & Taika Reform (translated as “Great Reform”). Taika Era : Taika (大化) was a Japanese era name. This period spanned the years from 645 through 650. The reigning emperor was Kōtoku. It was also known was Taika Reform/Great Reform.

Taika is sometimes “Taika Waititi” and other times “Taika Cohen”. What’s with that, right? Well, that’s because “Waititi” is his father’s last name and “Cohen” is his mother’s last name. He said he uses them both because his parents never got married and he can’t decide who he loves more…As simple as that! :D 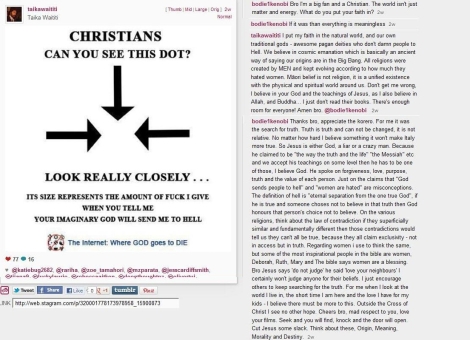 Personally, I share bodie1kenobi’s beliefs, but this website is all about Taika, so I’ll just shut my mouth and keep on loving and respecting my favourite guy. – Syl

My favorite animal is … any type of birds! They are the luckiest because they can fly …..” (The Arts Foundation Interview)

Some of Rousseau’s paintings ….

We are always (to some extent) influenced and inspired by people we love and admire. Are you curious about Rousseau’s influence on Taika’s paintings? see it for yourself  >>> some of Taika’s artworks.

This reminded me now … Michael Jackson loved and owned Henri Rousseau’s painting and it was sold from his LA mansion after his death ( the article ). What a coincidence as we all know Taika’s love for MJ !!! (Now, this is  making me sad…). But, on a positive note, MJ’s nephew, Taj Jackson is a fan of  “BOY”. Here is Taj’s direct tweet to Taika about the film :

Ever wonder what lies underneath those sexy & stylish clothes of Taika?
Of course those mean as Tatts :D
(click on the thumbnails – trust me its worth it!) 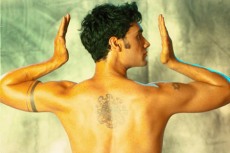 There used to be a small star on his left arm, which looked like David’s star, but now a tattoo of a fantail (a New Zealand native bird) covers it. Why the fantail? Taika is Maori from the East Coast of the North Island of New Zealand, so our guess is from Maori legends,

“Toi (Toi-kai-rākau, or Toi-the-wood-eater) is the traditional origin ancestor of the tribes of the East Coast of the North Island. Their traditions make no mention of his coming to New Zealand, and the inference is that he was born there. The Tūhoe tribe of the inland Bay of Plenty, say that Toi’s ‘ancestor’ Tiwakawaka was the first to settle the country, but only his name is remembered. Tiwakawaka is actually the name of a bird, the fantail.”

On his right wrist there’s a tattoo of a marae,

Under the marae there’s the name of Taika’s tribe’s family, Pararaki. Listen to Taika talking about it on PRI’s The World: Taika Waititi Revisits His Maori Roots.

You may already know this, but just to make sure that no one is left out from Taika’s sexy & hilarious front row face. Yes, that’s right! Taika has his signature “front row face” ( FRF)! :D

So, next time when you see his FRF, you know! :D

Taika is brilliant at everything, for example…

Now, the question is …. if there is anything he CAN ‘T do? And, the answer will be NO!! Not only can he do them all, but he does them so freakishly well ! ;)

Taika loves to work with his friends

In his both feature films, Eagle Vs Shark and BOY, Taika has worked with his friends repeatedly in creating his magic.

Let’s start with Nancy, Jarrod’s sister in Eagle vs Shark, and Auntie Gracey in BOY

That amazing talent is Rachel House, one of the best Kiwi actresses on tv, film and radio. You can also see her in “Whale Rider” which is one of the Kiwi films that captured the hearts of international audience. Her most recent work with Taika was in Super City, a tv show directed by Mr.T! ;-)

Wait!! the guy who is playing Nancy’s husband looks very familiar, doesn’t he? Ohhh… it’s Mr. Langstand from BOY! The name of this actor is Craig Hall and he was one of the strippers, along with Taika, on The Strip tv show!

Crazy Horses!! Pppffffffff!!! Chuppa, one of the founders of the coolest gang on earth! – the tall & tough guy in BOY plays a shy and introverted geek, Mason in Eagle vs. Shark. Well, it doesn’t seem like computer was his thing but Jarrod, Jemaine’s character, said he was the best computer hacker ever.. :D

Not to mention his long and frequent collaborations with his best buds, Bret & Jemaine of Flight Of the Conchords !!

1. Taika was inspired to write Two Cars, One Night while hanging out in a g-string, fully waxed for a humiliating acting role as a stripper. Yow!

2. One of his first creative projects featured mummies having sex.

3. If you think Taika is attractive, wait ’til you meet him in person!

[Added: Chloe, one of the creators of this site, testified that Taika has the most beautiful big bright eyes – yes, she saw & talked to him in person!! *melting*]

Posted @withregram • @a.ciriaco GO Team! So greatful for the opportunity to bond, share and have fun!
Posted @withregram • @zenypicone #winning all day everyday with this magical team in LA. Cheeeeeheeeee @taikawaititi!! #taikawaititi
Photoshopped! but it would be nice to have some insight into what Taika was up to in NZ really. Posted @withregram • @dave__chapman @taikawaititi dropped in for a SHORT visit this morning. He said that he's travelling around New Zealand on a search for filming locations for an upcoming production that he's thinking about doing. Unfortunately he said, that he wasn't at liberty to tell me that it's "The Time Bandits sequel" as it was all hush hush at the moment. However he did offer me a SMALL role as a DWARF in the production that can't be named. I thought to myself, "Life is SHORT and so are my legs" and agreed to do it. 🙂
Posted @withregram • @aaronepstein There’s a lot going on here… I apologize. / Photo by @aaronepstein / #ourflagmeansdeath