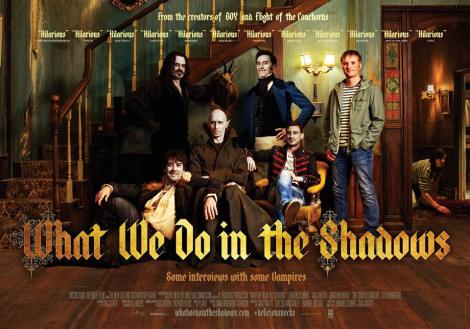 Premiered at the Sundance Film Festival 2014

Synopsis
Consider the living quarters of vampires and stodgy old castles in Transylvania might come to mind. But these aren’t your typical bloodsuckers. Viago (379 years old), Deacon (183 years old), Vladislav (862 years old), and Peter (8,000 years old) have chosen to share a flat in Wellington, New Zealand. Unfortunately for them, it’s hard to make new friends due to their constant thirst for blood. Without any mortal chums left to invite them in to all of the hip establishments around town, they’ve lost touch with the current social scene. Can these creatures of the night put aside their differences as roommates and adapt to modern society?

In What We Do in the Shadows, frequent collaborators Taika Waititi and Jemaine Clement share writing, directing, and acting duties—all with precise comedic timing. The end result is a hysterical mockumentary that unearths a secret, supernatural society where friendship and camaraderie are just as important as feasting upon the flesh of mortals.

About the Directors
Hailing from the tropical continent of New Zealand, Oscar-losing director Taika Waititi grew up just like the title character in the original Conan. This will be his third feature to premiere at the Sundance Film Festival. His first was Eagle vs. Shark in 2007, followed by BOY in 2010. He counts among his friends folks such as Stu, Toby, Warner, Ross, Dustin, and Niles. He also invented the sideways “Whatchoo talkin’ ’bout?” look.

Reclusive actor/director/MMA star Jemaine Clement lives in the mountains of New Zealand with his wife and 16 cats. He was once a business mogul in the ruthless door-to-door orange-juice-selling trade; however, the whole thing came tumbling down in 2006, and he was tragically reduced to having his own HBO show, performing sell-out concerts with his band, Flight of the Conchords, and acting in giant movies like Men in Black 3.

Follow the news on What We Do in the Shadows

#taikawaititi #repost @chrishemsworth : Album drops next week #getreadyworld @taikawaititi
#repost @kane_skennar_personal_ : Fun times working with these Kiwi cats way back in 2013 on cult film "What we do in the Shadows" 😎👹👻💀😂 #taikawaititi #jemaineclement #funtimes #nikonaustralia
#repost @thehivemusicco : Barry and I got reeaaaally lucky today and met this outstanding human ... mucho respecto @taikawaititi 🙏🏼💓 Thx again for the pic.
#taikawaititi #repost @rodinphotography : I was reminded of these images that I took of Taika Waititi back in ‘17 at the Hawai’i International Film Festival. There was such a polaroid vibe that decided to play around with some alternative edits. Originals at Gettyimages.com 😘