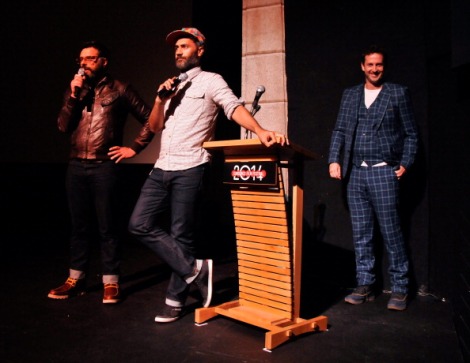 Taika Waititi and Jemaine Clement have unleashed their new vampire spoof at the Sundance Film Festival.

The film, What We Do in the Shadows, screened to a rapt midnight crowd who were also entertained by the co-directing and acting pair’s Q&A session which started with the deadpan duo asserting their film was the real deal.

“In February 2011 we were approached by the New Zealand Documentary Board to make a vampire documentary documenting the vampires of Wellington,” said Clement.

Clement: “We’d seen Blade 3. We thought ‘we don’t want to be in the room with those creatures’, and that’s very much the way we approached it.”

Shadows is a feature building on Waititi and Clement’s little-seen 2006 short of the same name which they used to test out the characters.

The pair’s creative partnership goes back to pre-Flight of the Conchords days when Waititi and Clement performed as the Humourbeasts.

Asked where the initial idea for Shadows came from, Waititi replied: “We both like vampires and vampire films and in 2005 nobody was doing vampire movies. Underworld had just come out [so] it was the perfect time to strike, and then it took us seven years.”

What We Do in the Shadows is essentially a talkfest between a bunch of vampire blokes flatting together in Wellington.

Clement plays the handlebar-moustached oversexed Vladislav – aka “Vladislav the Poker” – while Waititi is Viago, a foppish 18th century romantic with a German accent.

Young Nick (Cori Gonzalez-Macuer) enters the fold as a recent vampire with a Robert Pattinson complex and they also welcome a human flatmate Stu (Stuart Rutherford) who they strive to protect from other bloodsuckers because he’s useful to have around to help them deal with the technological demands of 21st century life.

Some of the film’s funniest moments come from encountering a pack of werewolves whose leader, Anton, is played by Rhys Darby; a mob of zombies also put in an appearance.

The main female role is played hilariously by Jackie van Beek as one of many followers/slaves wanting to get into the vampire boys’ club.

Though much of the action takes place inside the walls of the vampires’ crumbling Wellington abode (“the walls are made out of old Hobbit green screens” says Clement), they do venture out to attend the Unholy Masquerade Ball at the Cathedral of Despair.

Going out into the streets of the capital dressed as vampires for the original short was educational, said the pair.

Waititi: “There was one bit that didn’t really make it into the film as it was in the short, which was when we dressed up so we looked a bit like Prince and the Revolution. “We went to town one night on a Friday night, and it’s quite a macho society in New Zealand, so walking down the main street of Wellington was a really amazing experience, being called homos and faggots. It was terrifying.”

Clement: “It was also rugby night and it felt like were going to get beaten up.”

Waititi: “That’s probably why it took years to get over that and to get up the courage to make it into a feature.”

Clement: “But it didn’t really happen this time. Something has happened over the six years where it’s not such a big deal to wear some rough furs and dress up. Some change is good.”

The film was made on a small budget.

“Some of the people who did the special effects in the movie were paid in hamburgers and stuff like that – [they worked] just in their spare time from making other much bigger movies,” says Clement.

“Peter Jackson helped a lot,” added Waititi. “He lent us gear and stuff.”

Initially the pair thought they might churn out one of these films each year, but after five weeks of shooting and a year of editing they still hadn’t finished the first one.

Waititi: “We shot about 125 hours of footage that we had to trawl through so a lot of that time was just watching stuff and saying ‘well, that was dumb, don’t put that in!’ And then trying lots and lots of different stuff. There is gonna be like a 20-disc box set of extra features.”

The film is heading to next month’s Berlin Film Festival and as yet has no confirmed New Zealand release date.

What the reviewers said

Drew McWeeny of US website HitFix: “Now that we’ve seen a million fake documentaries. it’s hard to do it well, but they got it right from the very beginning and they kept the reality right on what they were trying to do. I liked it a lot more than Eagle vs Shark. It works better as a film.”

Quint from aintitcool.com: “The highest compliment I can give What We Do in the Shadows is that it reminded me a lot of Peter Jackson’s early work. It might not be as crazily inventive as Meet the Feebles or as bloody as Braindead, but it shares a common distinctly disturbed [in a good way] Kiwi soul.”

John DeFore from The Hollywood Reporter: “Ace writing and comic performances ensure love from the geek sector, while the presence of Flight of the Conchords co-star Clement both behind and in front of the camera should help attract attention beyond that realm.

“However tired one may be of the mockumentary format, the schtick is well suited for this material; in fact, it’s easy to imagine a straighter storytelling approach falling flat or playing like an Addams Family rip-off. What we have here looks like an undead edition of The Real World.”

Listen to the post-screening Q&A with the directors and the cast:

Find more reviews on our page of the movie. The Articles and interviews from the Sundance are being updated constantly as well as our Gallery.

From @vasjmorgan ‘s Story
Posted @withregram • @vasjmorgan Threw a party for Rita last week, the room was filled with so much love, laughter and fun and @myleshendrik captured it perfectly 🖤 love to everyone that came
Posted @withregram • @ritaora Can't believe I've been doing this for 10 years already 🥺❤️ Had the best night celebrating a decade of making music AND my new single You Only Love Me! Felt so special and I can't wait for the new era 💫 #RO3 is coming baby!! Who’s listening to my new single today?
October 2022 Posted @withregram • @runetemte Lovely to meet you and a game changing experience working with you @taikawaititi Bandits in time! @paramounttelevisionstudios @appletv @blommigaskjortor @anoncontent