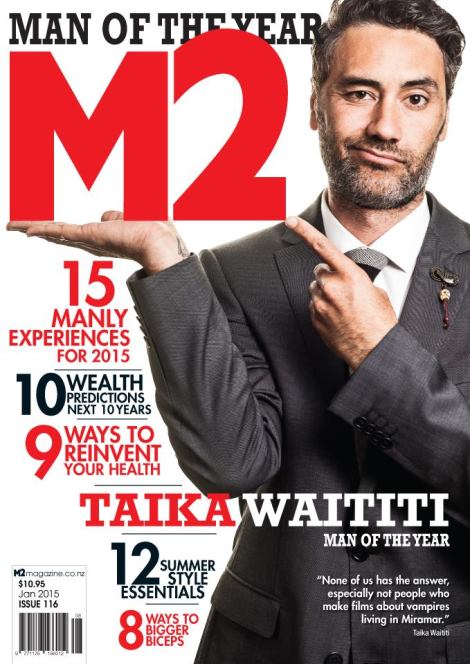 Director, writer, artist, man behind some of the best onscreen NZ comedy in years… and now 2014 M2 Man of the Year – Taika Waititi.

The man’s had a stellar year with his latest film, What We Do in the Shadows, (which he co-directed, co-wrote and starred in) getting rave reviews and accolades both here and overseas. He also penned the script for Disney’s latest animated feature and dressed up as a Maori wizard for the now infamous Air New Zealand safety video. All this while juggling fatherhood and magazine photoshoots.

To discover more about M2 Magazine’s 2014 Man of the Year and read Taika’s Top 10 Tips For Being a More Sophisticated You, pick up a copy of M2 January 2015, on sale Monday 15th December.

1. Accept that you’re not cool.
Chill out and stop walking around like you’re in Wolf of Wall Street.

2. Listen.
This is one of the hardest things to do but it’s also one of the coolest.

3. Be original.
You don’t always need to follow the pack.

For the full 10 Tips, pick up a copy of M2 January 2015 wherever good magazines are sold, or save yourself hassle and money and subscribe now.

OR go to What The Folk forum, to see the scans of the article.

Go to M2 website to see more photos from the photoshoot with Taika.

#repost @kane_skennar_personal_ : Fun times working with these Kiwi cats way back in 2013 on cult film "What we do in the Shadows" 😎👹👻💀😂 #taikawaititi #jemaineclement #funtimes #nikonaustralia
#repost @thehivemusicco : Barry and I got reeaaaally lucky today and met this outstanding human ... mucho respecto @taikawaititi 🙏🏼💓 Thx again for the pic.
#taikawaititi #repost @rodinphotography : I was reminded of these images that I took of Taika Waititi back in ‘17 at the Hawai’i International Film Festival. There was such a polaroid vibe that decided to play around with some alternative edits. Originals at Gettyimages.com 😘
#taikawaititi #repost @wade.farmer : Thor Training Update -