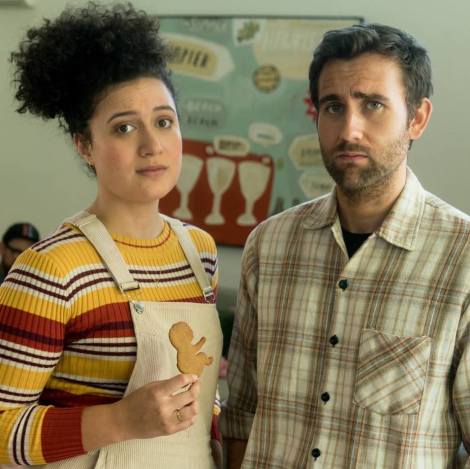 Matafeo plays Zoe, a tree surgeon who becomes pregnant by her longterm boyfriend Tim (Lewis) and subsequently freaks out as she tries to rush through her dreams before she turns into a mother.

Written by actress Sophie Henderson (Human Traces), Baby, Done is a semi-autobiographical story inspired by her and Vowell’s own reaction to starting a family. This is the duo’s second feature together after 2013’s Fantail, which took a People’s Choice Award at Melbourne International Film Festival.

Vowell says, “Sophie and I are over the moon to be working with Rose and Matthew — they’re hilarious together and their chemistry is electric. We’re already having a lot of fun making it and can’t wait to deliver it to the world.”

Matafeo […] says, “I’m super excited to be in a legit movie… I’ve known and admired Sophie and Curtis since I was a little teen fan of the Auckland creative scene and it’s a dream to be working with them, plus it’s so nice to have to an excuse to come back to New Zealand so I can open all the mail my Nan has been saving for me.”

Lewis […] says of Baby, Done, “I fell in love with the script immediately and the team of creatives behind it. I’m also a big fan of Rose and her work and so to be opposite her shooting in beautiful New Zealand is a privilege and I’m looking forward to bringing this story to life.”

Piki Films’ credits include Waititi’s Hunt For The Wilderpeople and his upcoming JoJo Rabbit as well as The Breaker Upperers from comedy duo Madeleine Sami and Jackie van Beek.

Morgan Waru is producing Baby, Done with Waititi and Carthew Neal exec producing for Piki Films. The movie is made with investment from The New Zealand Film Commission, Wallace Productions Limited and Department of Post. New Zealand distribution will be handled by Madman and Piki in 2020 with Madman releasing in Australia. International sales are with Emily Gotto and Piki Films’ Neal.