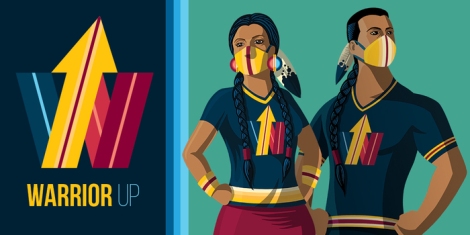 Together with other celebrities, Taika Waititi joins IllumiNative’s ‘Warrior Up’ campaign to combat COVID-19 in Indian Country. This powerhouse group spotlights Tribal Nations and urges community members to Stay Home, Together.

Released by Native-led nonprofit IllumiNative, the informative and humorous clip featured a mix of artists, actors, government leaders and activists reminding viewers that they will protect their elders and be “a good nephew,” “a good niece” or “a good parent” by social distancing.

The PSA is in partnership with Harness, the group co-founded by America Ferrera, Wilmer Valderrama and Ryan Piers Williams, and is part of IllumiNative’s #WarriorUp campaign, which will also feature a virtual town hall and a weekly podcast to raise further awareness of the pandemic’s impact on Native communities.

“For decades, we have been fighting for the visibility of Native peoples. Now this fight has become absolutely vital to ensuring that Native communities are not left behind or erased from the COVID-19 response,” said Crystal Echo Hawk, executive director of IllumiNative, in a statement. “Tribes and Native communities need to be seen, heard and included in local, state and federal solutions and conversations. Together we can find a common pathway forward out of this public health emergency.”

In addition to the PSA, IllumiNative and rapper Taboo, NDN Collective and Indian Country Today will co-host a virtual town hall on Thursday. The event will livestream on Taboo’s YouTube channel as well as on Facebook Live on each of the participant’s Facebook pages to unite Indian Country and allies against COVID-19. Native leaders, legislators, influencers and advocates will explore how the pandemic has worsened disparities affecting not only Native Americans but all communities of color.

IllumiNative is also launching a 30-minute podcast this week focused on telling stories about the impact of COVID-19 on Native communities. Hosted by Hawk, the podcast will be released weekly and feature conversations with trusted Native leaders and include news and stories across Indian Country.

To learn how you can support Native communities, go to: illuminatives.org/warriorup